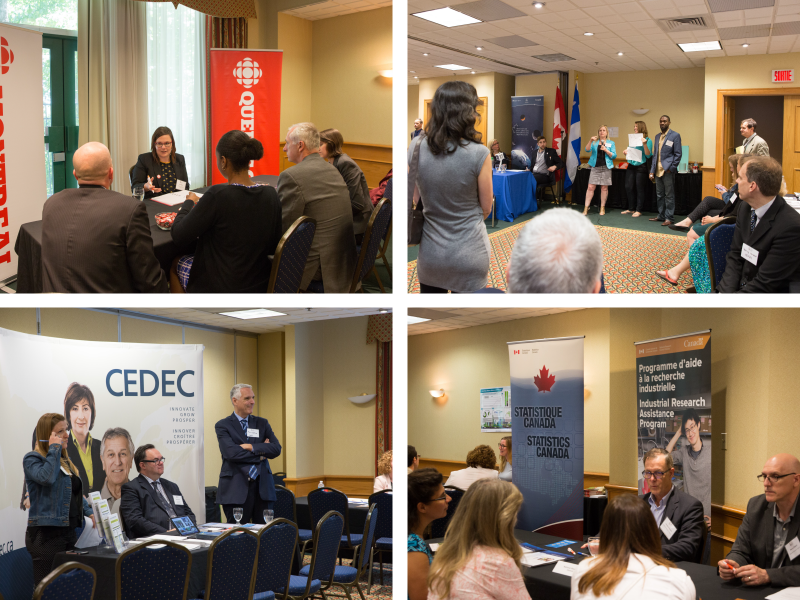 More than 70 community leaders and 14 federal institutions participated in “Speed-Dating with Quebec’s English-speaking Community,” a three-hour matchmaking event during the Annual Meeting of the Quebec Community Groups Network on June 15.

With financial support from Innovation, Science and Economic Development Canada (ISED), and organizational backup the Community Economic Development and Employability Corporation (CEDEC), this first-ever “Speed Dating” was for many, the highlight of the two-day meeting. The room buzzed with conversation as 13 teams, each comprising five leaders from across Quebec’s English minority-language communities circulated among the tables of federal officials for two hours.

“It’s fantastic,” said Kim Hamilton of the Quebec English School Board Association. “The speed dating element is kind of fun. The idea is very well put together.”

Another participant, Charlene Sullivan of Neighbours in Rouyn-Noranda, marveled at the amount of information she’d gathered; “I have a lot to analyze now,” she said.

Lorraine O’Donnell of Concordia University’s Quebec English-speaking Community Research Network, said the event helped her identify “many possibilities” for support for university-CEGEP partnerships, “including some I wouldn’t have expected, like the Canadian Space Agency.”

“The matchmaking session was such as success with members and federal stakeholders that we plan to learn from this years’ experience, fine tune our approach, and adapt it for future events,” said QCGN Director General Sylvia Martin-Laforge. “Our federal partners were so enthusiastic, that they are hoping to use our model for building relationships with other official language minority communities.”

The Government of Canada’s 2017 budget focused on economic growth, anchored around a skilled workforce, innovation, and employment. The Speed Dating event enabled members of Quebec’s English-speaking community to meet with federal institutions focused on innovation, research, employment, and business success.