English-speaking Quebecers will not be getting such a raw deal from the province in the newly-passed health care reform after all.

A long and tough set of negotiations to allow English Quebecers to maintain some control over their health care institutions in the Bill 10 reform has ended without too much heartbreak, the Quebec Community Groups Network announced at a press conference Monday.

The recently-passed health care reform initially threatened to greatly diminish anglo input in health care institutions but changes were made in the legislation to assuage some of those concerns. 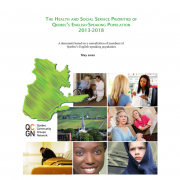 Coalition of Anglophone groups satisfied with ‘net gain’ in Bill 10