In its recent paper on official languages, English and French: Towards a Substantive Equality of Official
Languages in Canada, the Government of Canada makes a legislative proposal to increase the use of
French in federally regulated private enterprises. The paper outlines specific proposals to provide rights
to work and rights to services in French – but not in English – in federally regulated private businesses in
Quebec and in regions with a strong Francophone presence.

The Government of Canada’s proposal to grant language rights to one language group and not the other
runs counter to the purpose of the Official Languages Act and offends the government’s constitutional
obligation to ensure respect for English and French as the official languages of Canada. It also poses
significant challenges for the substantive equality of the English-speaking minority in Quebec. 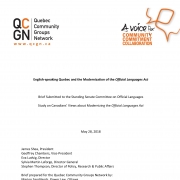 Founded in 1995, the QCGN is a not-for-profit organization linking more than 56 English- language community organizations across Quebec.

The Quebec Community Groups Network (“QCGN”) welcomes this opportunity to contribute to this Committee’s study on modernizing the Official Languages Act (“the Act”). In the spirit of modernization, the QCGN takes this opportunity to present a picture of the contemporary English-speaking community of Quebec. As this Committee noted in 2011, there are certain widely-held myths regarding this community. The QCGN hopes to contribute to a modernized understanding of this community and its role as a unique and important official language minority community in Canada. In this regard, the QCGN puts forward three propositions:

In this brief, the QCGN presents proposals for a modernized Act.

In this brief to the House of Commons Standing Committee on Official Languages for a study on the Full Implementation of the Official Languages Act in the Canadian Justice System, QCGN expressed support for a Supreme Court of Canada appointment process that is transparent, inclusive, and accountable to Canadians. The brief also states there must be a systemic capacity for justices to hear cases and render decisions in both official languages and that the language skills of judges must be sufficient to ensure the evolution of Canadian law. 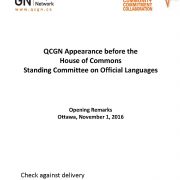 Opening remarks from the QCGN appearance at the LANG committee in Ottawa on November 1, 2016. 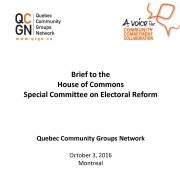 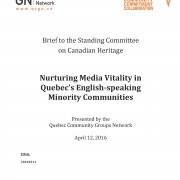 In a brief to the House of Common’s Standing Committee on Canadian Heritage for its study on The Media and Local Communities the Quebec Community Groups Network presented a series of pragmatic, cost-effective steps designed to rapidly help restore the vitality of news media serving the province’s English-language community. The QCGN proposed cooperative ventures, including the creation and growth of English-language community media hubs to serve outlying regions starved of local content. 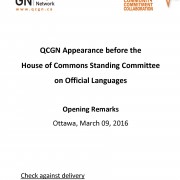 In opening remarks to the to the Standing Committee on Official Languages the Quebec Community Groups Network encouraged parliamentarians to find ways to make support for Canada’s English and French linguistic minority communities flexible and responsive the unique needs of each community. 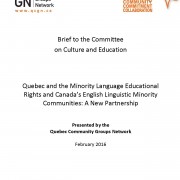 In a brief to the National Assembly’s Committee on Culture and Education studying Bill n°86 : An Act to modify the organization and governance of school boards to give schools a greater say in decision-making and ensure parents’ presence within each school board’s decision-making body, the Quebec Community Groups Network argued the proposed legislation tramples on minority rights and should be scrapped. The QCGN stated that the provincial English public school system is a key community institution and that the bill violates the constitutional rights of Quebec’s English-speaking community to control and manage its own schools. 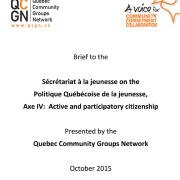 In its brief to the provincial youth secretariat hearings on Quebec’s youth policy, the Quebec Community Groups Network argued that a targeted approach reflecting their specific needs as a minority is crucial for provincial youth programs and policies to have an effect on Quebec’s English-speaking youth.

In a brief to the panel examining the possible application of a new system for school board elections, the Quebec Community Groups Network goes over constitutional rights of English-speaking Quebecers as they pertain to the control and management of minority language school boards.