PERCÉ – Attracting immigrants to the Québec regions, especially the Gaspé Coast is quite a challenge. Tools and financial incentives are needed to support this type of initiative. The Québec Community Groups Network (QCGN) made representations at the Federal level and its priorities have been heard.

”QCGN is pleased that Quebec’s English-speaking community was consulted and its concerns included in a House of Comons Standing Committee on Official Languages study of Immigration as a Development Tool in Official Language Minority Communities. The QCGN is especially satisfied with the recommendation that sugests Citizenship and Immigration Canada increase intergovernmental efforts to assess the needs of our community. This would provide it with financial support so that it can develop its immigration network, particularly in the regions, ” a recent press release published by the QCGN stated.

It’s also mentioned tht ”the Committee’s report notes that Citizenship and Immigration Canada should recognize that our community is a model of linguistic integration and that it recognize the specific role that our community plays in the integration of immigrants in the societies of Quebec and Canada, ” said QCGN Past-president Robert Donnelly […] 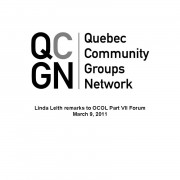 Here to stay: the hip Anglo